After close to seven months of discussion with the City of Westmount, preliminary work on the repair of the bell tower finally began in May.

The issue we had to resolve with the City was accessing the bell tower. Initially, the plan was to access the tower from the outside by opening one of the louvres on the east side of the bell tower and adjusting it to function as a door should work be required in the future. The City was not favorable to the idea that we modify in any way the external appearance of our patrimonial edifice. After several months of discussion with Louis Brillant, our consulting architect, it was decided that the bell tower be accessed from inside the church.

This was done by slowly lifting one of the church’s interior ceiling panels, located at the back of the choir loft, in order to access the narrow catwalk that leads from the back to the front of the church, where the bell tower is located. The ceiling panel that was lifted will be laid back in its place once the work is done and fitted to facilitate future entry. The good part is that there will be no visible trace that this panel has become a door, so to speak. 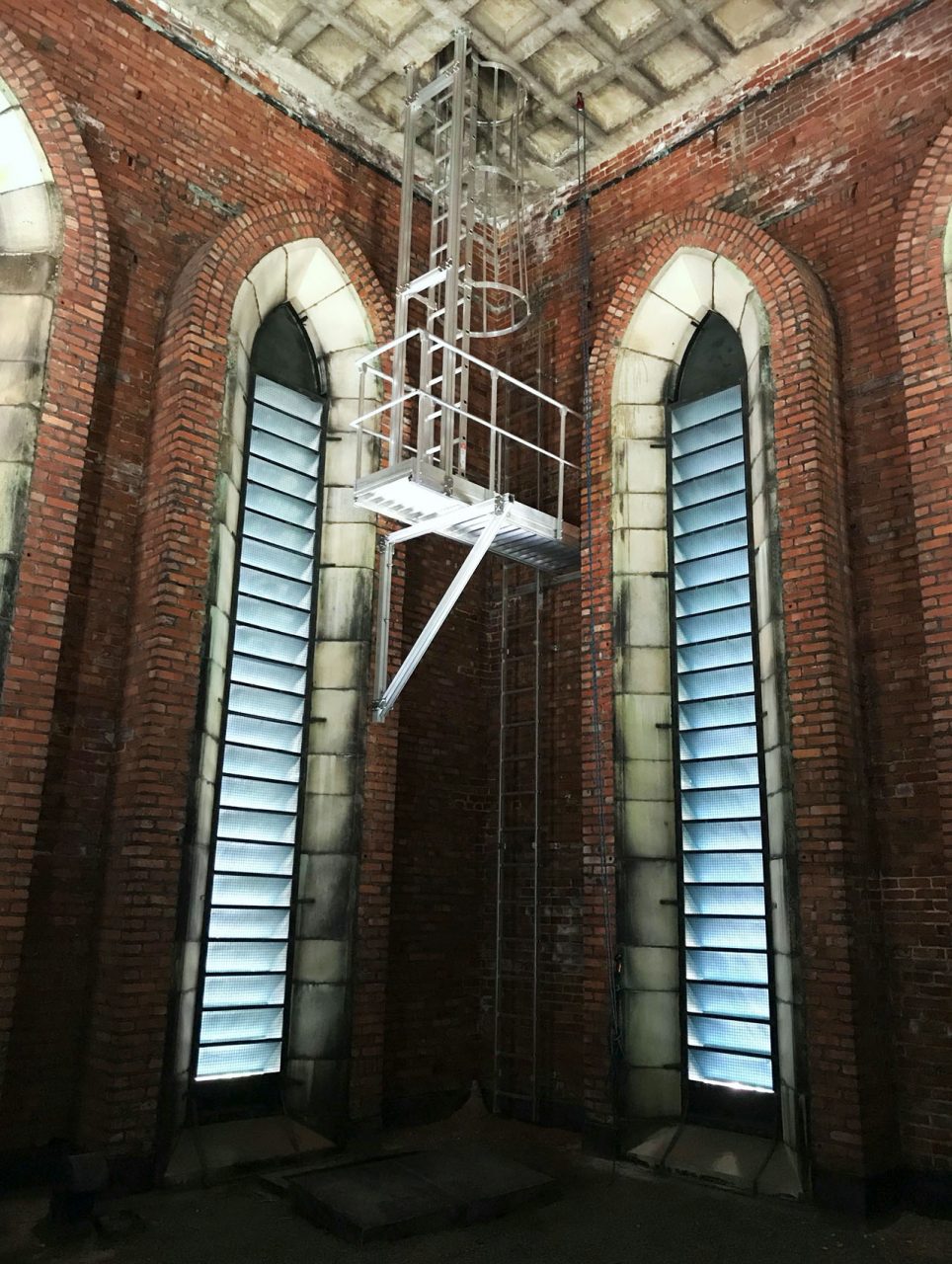 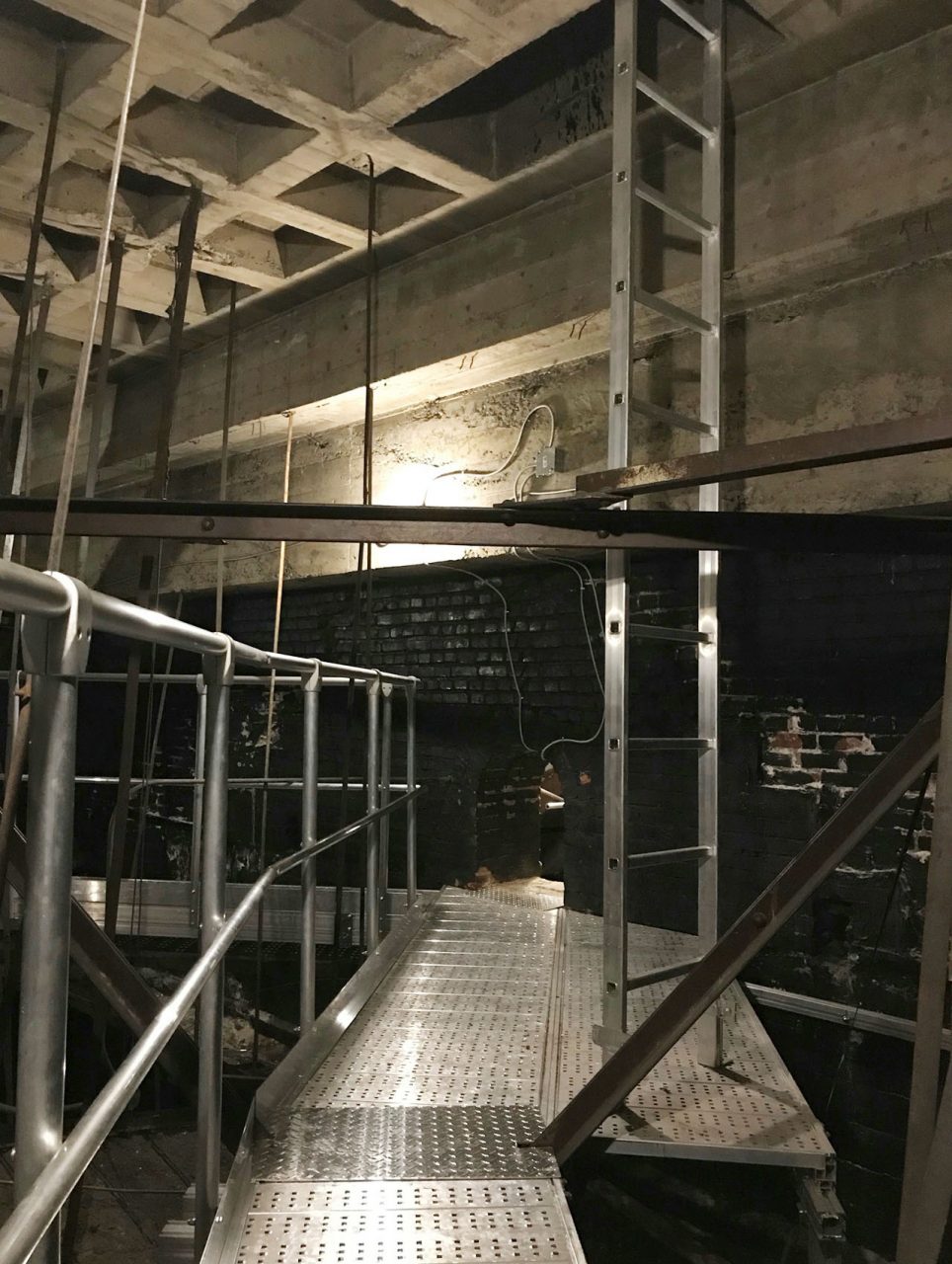 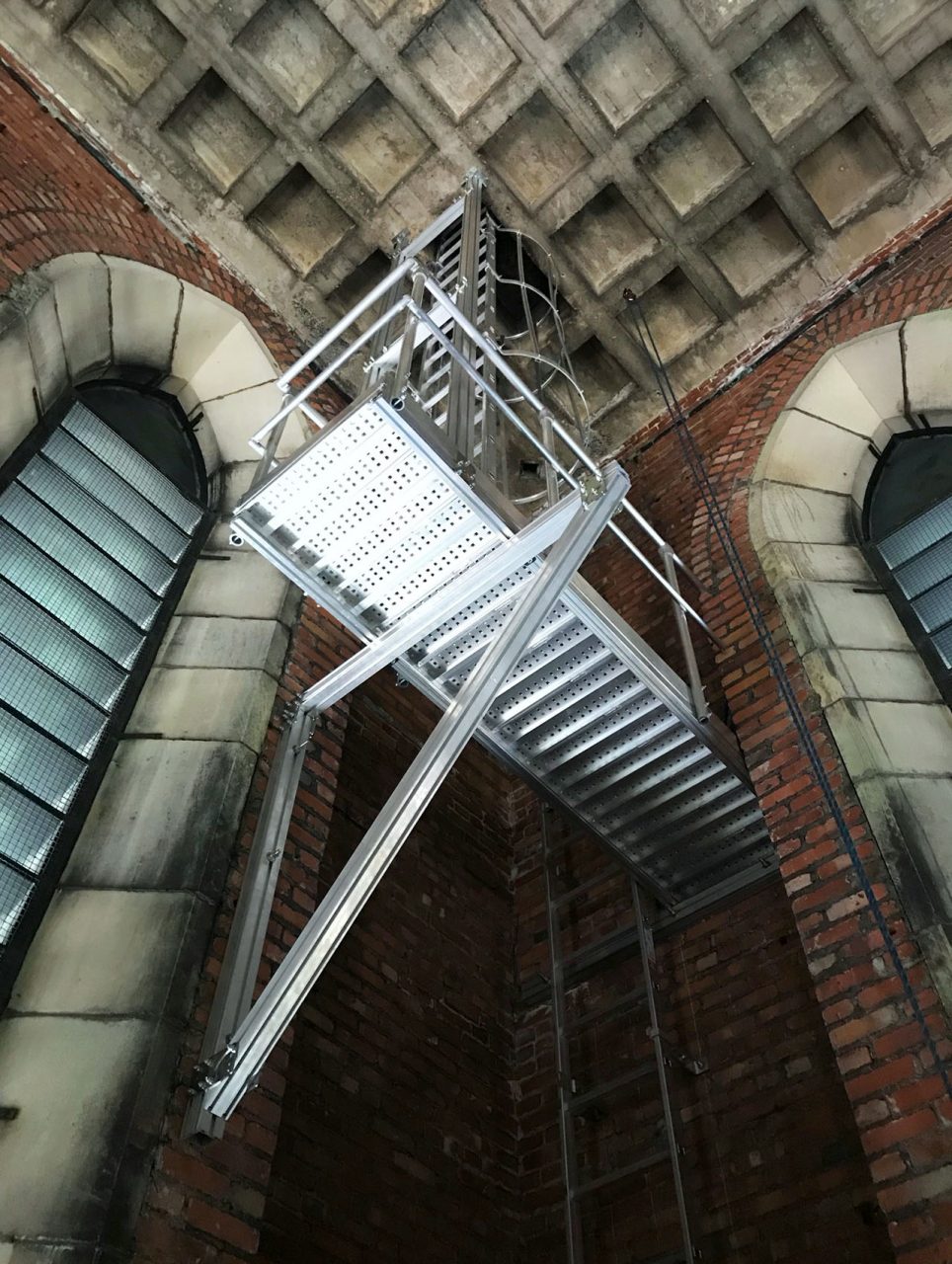 So scaffolding was erected in the choir loft, the interior ceiling panel was lifted, and the workmen added to the existing catwalk. They spent the first several weeks making this catwalk a much safer means of moving from the back to the front of the church. The catwalk itself was widened and fortified; solid handrails were installed so that the workmen carrying supplies and materials to the bell tower would be able to have proper footing and balance. Additional lighting was installed so the workmen could see where they were going.

Finally, a specialized ladder, ordered from Europe, was installed where the catwalk ends so that the workmen can descend safely into the bell tower to do their work. It is important to note that this interior ladder is a permanent installation.

In summary, after 100 years of existence, there is finally a safe and viable access to the bell tower should additional repairs be necessary in the future.

By the way, the assessment of those who did all this preliminary work to prepare for the masonry repair in the bell tower is that the original builders did an excellent job in constructing the church — we have a very solid and well‑built structure! 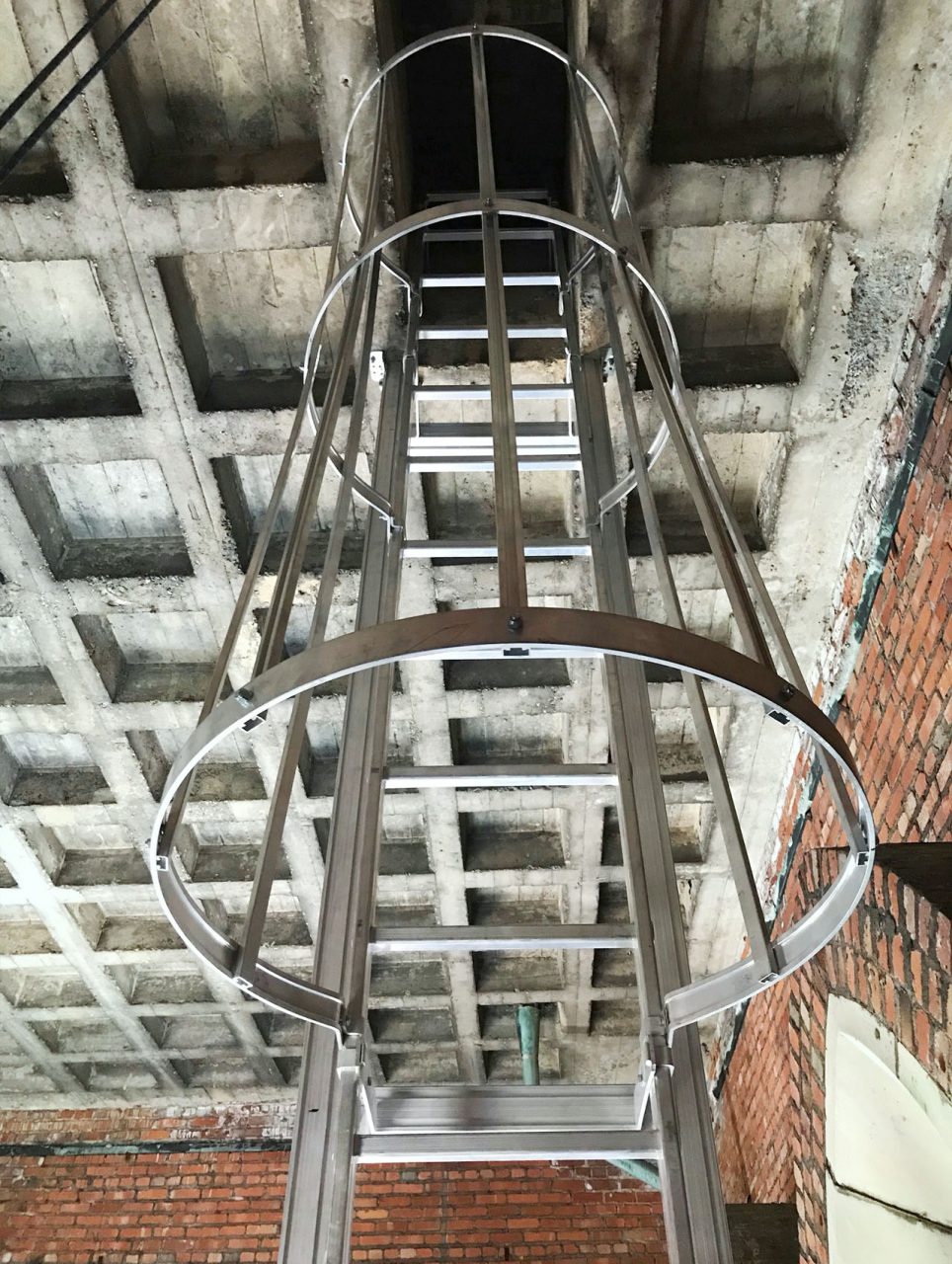 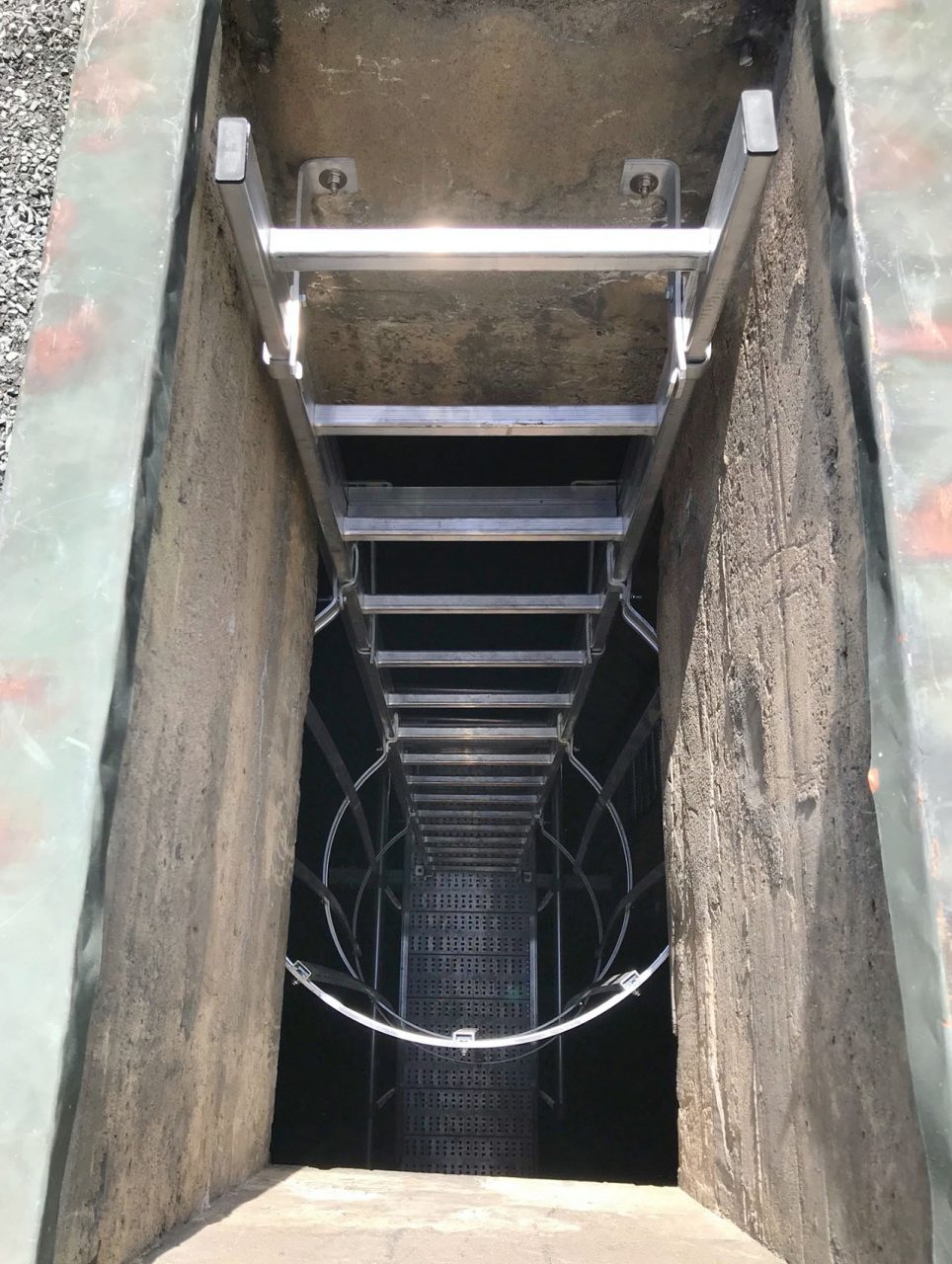 Once the masons begin their work, we will keep you up to date on their activity, and we will continue to post pictures of the progress made.

To participate in the success of the Capital Campaign >>>

©2021 Ascension of Our Lord, Westmount